It’s seems that every week brings a new Amazon technological innovation, and after the announcement of the Amazon Dash home order buttons comes the even more futuristic Amazon Echo. Following tests in the US, the company are planning on launching in Germany and the UK and it will allow people to operate various internet and electronic devices in the home via voice command. Yes, just like in Star Trek, although without the sliding doors. Mind you, we wouldn’t be surprised if Amazon were planning to launch them too soon…


What You Can Expect 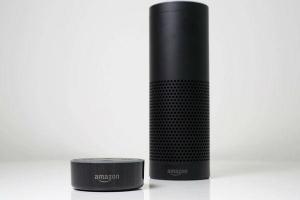 Well, it looks quite unassuming, but the Amazon Echo responds to voice commands that will not only let you vocally control internet-connected devices in your home but also turn light switches and kitchen appliances on and off, stream music without you having to touch any buttons, and even answer your questions by using search engines so you don’t have to. As of today, they’ll be available to pre-order for £149.99 (take a look using our Amazon promo codes) and will be sold alongside the Echo Dots, small Bluetooth attachments that you place on your devices around the home, and these will be available in packs of 6 or 12.

But is this all really necessary? Well, obviously we’ve all managed just fine without one so far in life, and if you feel like this new technological innovation might have the potential to be, at best slightly intrusive, and at worse, a sci-fi nightmare waiting to happen, we took a look at some slightly more old-fashioned alternatives…

One scenario in which voice activated internet searches might be useful is if you have a small baby or child to look after, in which case this Amazon Echo thing would be the perfect gift to all new parents, and perhaps anyone who’s ill or injured, but everyone else can make do with their smartphones, right? It’s not like they’re that archaic.

When it comes to the whole ‘intelligent assistant’ function, think of this as the perfect opportunity to come up with a shabby chic alternative that can not only help you stay more organised, but also give your home a certain rustic but contemporary look. Yes, putting a chalkboard in each room, or even using special paint to create a chalkboard wall could help you out no end, and you can use Homebase discount codes for any DIY essentials you might need.

We can’t deny that being able to turn on a coffee machine while you’re still lying in bed is a very useful thing, but what about those of us who want tea instead? A Bluetooth kettle is only of some use if there’s water already in it and if that is the case it won’t make you the nicest cup of tea in the world anyway. If this is a priority for you, consider spending your money on a state of the art kettle instead, something that will boil your fresh water is the fastest time possible – you can use ao.com promotional codes to take your pick from a top notch selection.

As handy is appears to be, one very important drawback to the Amazon Echo might be our over-reliance on it and what happens when it develops a fault – how on earth would we cope? But in all seriousness, the Amazon Echo sounds like it might be rather fun, and even incredibly useful for those who are incapacitated for one reason or another. But for anyone who’d prefer to keep the household tech to a minimum, then we’re sure you’ll be absolutely fine. And you’ll always have a fantastic kettle to fall back on.